I officially added the 4th country to my List of Places I Have Been when we landed in Dublin, Ireland. It was a relief to know that we
wouldn’t have to worry about a language barrier – just staying awake after spending the night at the airport. (I will not miss depending on public transportation when I get back to the States!) Once again, our weekend in a different country started with a meal and a conversation at the first cafe we found that was open. (The man there was extremely nice – wrote down a list of places he thought we should see…. and avoid.)

We toured a few still-active crypts (with our own requested, special lecture from the tour guide afterward, since we joined the group late and missed the beginning history lesson about the people in the crypts), and I bought my one Irish souvenir at a market – a book of traditional Irish fairy tales. Of course, we also had to take a nap at the hostel after dinner… Which turned into staying in the hostel until the next morning when we went on our free Dublin walking tour. Our tour guide Lisa was fantastic! She was born and raised in Dublin, and very knowledgeable. We all loved her humor, and spoke with her for a few minutes after the tour was over. However, the real highlight of my Irish weekend was the afternoon spent in Howth. 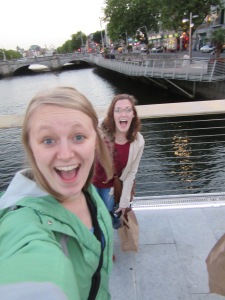 Howth is an ancient fishing village that is mostly away from the tourists, and only a short train ride out of the city center. (It is not pronounced like “house” with a lisp – the “h” is mostly silent when the locals say it.) And the little village was GORGEOUS. The beautiful beach and harbor had boats everywhere in the clear water. I didn’t realize how much I needed sun exposure until we sat on a high wall next to the waves for awhile, enjoying the cupcakes and macaroons we bought at a little market. Most of our energy was used up trekking to the high point of the area to take in the panoramic view, which was breathtaking.

But as you might imagine… We did not want to make the 20 minute hike back down to the train station after being on our feet all day and having dinner at a nearby pub. As we waited for the bus that was supposed to take us back down to the Howth station, a different bus parked, and out walked the driver. I’m not quite sure how our conversation got started, but we ended up speaking with him for at least 15 to 20 minutes as he waited for his departure time to roll around.

This man might just be the friendliest bus driver in Ireland, though from what I experienced everyone was really kind (at least – compared to the average Londoner). He told us about all of his travels to the US and throughout Ireland. Between complaining about airline food (he takes his own), giving us a mini history lesson about Ireland, and telling us we shouldn’t have bought round-trip train tickets because he drives his bus straight into the Dublin city centre, we learned he used to be a tour guide, which was probably why everything he said was so interesting. Then, when it came time for him to start his route he just looked at us and said, “Well, you coming or not?”

We asked how much it would be, and he just waved us off. “Don’t worry about it.” We got a free bus ride all the way back to Dublin, in less time than it would have taken us to wait for the train and go back that way. None of us could believe how nice he was to us all, and since we were pretty dead on our feet at that point the kindness was very much appreciated. Really, everyone we had in-depth conversations with was very kind. From the crypt tour guide, to the cafe employee, to the Dublin tour guide, to the bus driver – our Dublin weekend wouldn’t have been the same if we hadn’t met any of the locals.

“Try new things, meet new people, and look beyond what’s right in front of you. Those are the keys to understanding this amazing world we live in.”  Andrew Zimmern