York: In Which We Had A Personal Tour Guide 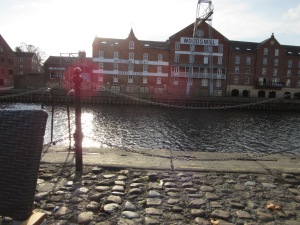 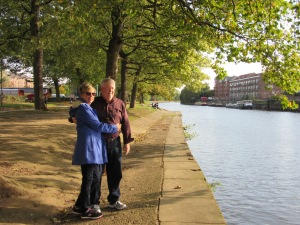 it and always wanted to return, so I made sure we stopped over for a few nights on our way to Edinburgh. As soon as we set our bags down in the hotel we went walking along the picture-perfect river until we found a pub for dinner. We soaked up possibly the last rays of sunshine for the rest of our European trip at the table outside as the local university crew teams rowed by.

No one could ever convince me sticky toffee pudding isn’t the best invention since sliced bread.

Mom decided to have a slow, late breakfast on the cold, rainy next morning while dad and I found the meetup spot for the free walking tour I RSVP’d us for. The poor tour guide thought he would be able to go home because no one would show up – and indeed… Dad and I were his only two tourists. It worked out well for us, at least… We could always hear what the guide was saying and could ask any question at any time.

Bonus: Dad didn’t get lost when he stopped for pictures, since there were just the three of us. I think we finished a 2.5 hour tour in slightly under 2 hours, seeing as three people can move much faster than a group of 20. The guide was a history student at the local university, and was a walking encyclopedia about York and its history. (Thanks to this tour, I have a book about the Wars of the Roses on my 2015 reading list.)

We walked the old city walls, saw buildings made from the remnants of other buildings, and I almost sat in an old Roman stone coffin. (It was too wet.) My boots started leaking as my toes were cold and socks felt slightly soggy, but we learned how to tell the difference between original stone steps and Victorian-era “restorations,” which was cool. The Shambles were nearly empty due to rain… And it is difficult to not be in awe of York Minster, the largest medieval cathedral in Northern Europe.

Dad and I picked up mom from the hotel (luckily, the rain had ceased and I could put on some warm, dry socks), and we went walking through the streets to look through the shops. York was the only place we almost lost mom, thanks to the yarn shop where she was helping a lady pick out a complimentary color for a scarf to be knitted. Despite the after-rain crowds, getting lost around The Shambles was fun, especially when we ran across a street market full of tents and I found my new favorite winter coat. It is a monster of a coat with a hood and I wore it every day for the rest of our trip… (And I have been wearing it back home every day the weather is under 45 degrees.)

The next morning our traveling circus was at it again, dragging all of our luggage through the York train station and stuffing it in the luggage racks on our way to Edinburgh. I wished we had time for a longer stay, but at the same time I was excited to get to Scotland.

“We live in a wonderful world that is full of beauty, charm and adventure. There is no end to the adventures we can have if only we seek them with our eyes open.”
― Jawaharlal Nehru